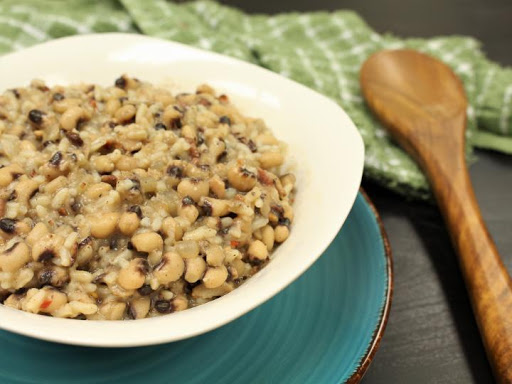 Welcome in the New Year with Hoppin’ John, a traditional New Year’s Day dish, and luck will follow you all year long!

WHAT IS HOPPIN’ JOHN?

Hoppin’ John is a dish traditionally eaten in the southern United States on New Year’s Day. Dating back to the early 1800s, it is made with black-eyed peas (aka cow peas), rice, and meat (usually pork, in the form of bacon or ham). The meal can also include collard greens and corn bread.

WHEN DO YOU EAT HOPPIN’ JOHN?

For some, the tradition of eating Hoppin’ John begins at midnight (New Year’s Eve), when the dish is served with a Champagne toast.

New Year’s Day is the traditional day to eat Hoppin’ John. Any leftover can be enjoyed on later days, but be aware that the name of the dish changes to Skippin’ Jenny. Stretching the dish into leftovers demonstrates your sense of frugality and promises even greater prosperity in the new year!

The ingredients in Hoppin’ John have symbolic importance, and eating this dish on New Year’s Day portends good fortune in the new year:

Some say that good luck visits those who count the black-eyed peas on their plate for a hint at the amount of luck or wealth that will ensue.

The custom of eating all but three of the black-eyed peas on your plate promises a trio of benefits—luck, wealth, and romance.

Legend has it that Sephardic Jews served black-eyed peas during Rosh Hashanah in the hope of fertility and good fortune.

WHAT IS THE HISTORY OF HOPPIN’ JOHN?

Hoppin’ John is considered Southern cuisine, mainly associated with North and South Carolina, but especially the Sea Islands, off the coast of South Carolina and Georgia. Historians believe that the recipe was created by African slaves, who introduced black-eyed peas to America and grew them in small gardens on rice plantations. Some sources suggest that cattle grazed on black-eyed peas in the Carolinas in the early 1700s. The peas helped to suppress weeds and added nutrition to the soil, and therefore the livestock.

The first appearance of the recipe for Hoppin’ John occurred in 1847 in a book titled “The Carolina Housewife.”

WHERE DOES THE NAME HOPPIN’ JOHN COME FROM?

Recipe for Hoppin John https://www.southernliving.com/recipes/classic-hoppin-john-recipe
Posted by Nancy Ewart at 10:53 AM