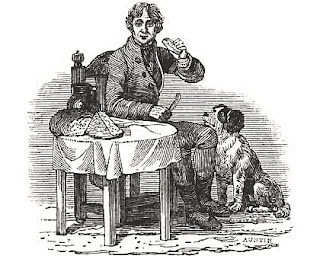 Alastair Johnston went looking for Richard Austin and found that there were two of him: a father and son of the same name who were part of the graphic revolution that transformed printing and publishing in Regency-era Britain.

This explosion of printed matter and a concomitant demand for illustrated books and periodicals was coupled with increased literacy and much improvement in the quality of printing. British books, for the first time, were at the forefront of the world's publishing.

Alastair Johnston has assembled a checklist of 116 books (and counting) illustrated by Austin, Jr. This research will be published by the British Library next year.

And as usual, we can expect an engaging, lively and scholarly talk from Johnston.

The Book Club of California

image and info from press release

Posted by Nancy Ewart at 9:51 AM No comments: 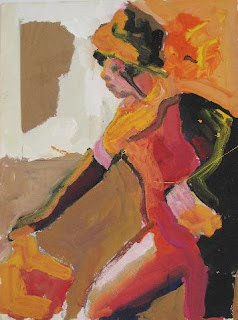 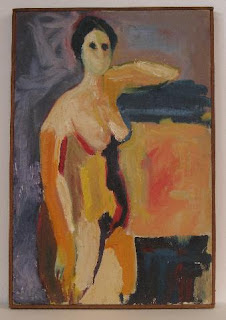 I was delighted to see this show. Alyceanne is an old friend from SFAI days. I've stayed in touch with her through our mutual friend Deloris and am always glad to see her works at the gallery in Half Moon Bay. She's an artist who should be ranked up there with David Park and Joan Brown (during her figurative phase) but somehow never got the publicity or the exposure that she deserved. The opening last Thursday was noisy, hot and crowded but her paintings were flying off the wall with lots more sales! The Lost Art Salon website has a complete biography of Alysanne plus more art works; go and rediscover the works of somebody who should never have been forgotten!

The Land Of A Million Cereals 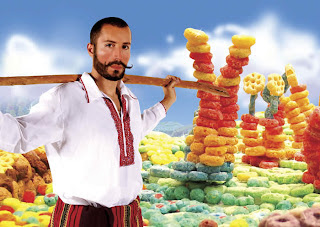 One of the funniest and most clever shows that I've seen in a while - great use of American's infatuation with cereal to make some very relevant social commentary.

Please join us for conversation, wine, and Bulgarian peasant food! This event is free and open to the public. RSVP to info@mission17.org

If we are what we eat, a significant degree of who we are, at least in this country, is cereal. In America, cereal is the most popular breakfast food and the third most popular product in the supermarket altogether-after only soda and cereal's constant counterpart, milk. In his show at MISSION 17, Ryan Alexiev explores this centrality of cereal to our constitution. But cereal, for Alexiev, functions as more than merely foodstuff. His engagement with cereal is informed by his appreciation of its history and continuing importance as a paradigmatic consumer product. Since the advent of cereal in the early twentieth century, the four basic grains-wheat, corn, rice, and oats-have consistently been packaged and promoted in a seemingly endless variety of products. Currently, there are 400 different kinds of cereals on the market, which ultimately are distinguished by little more than their ad campaigns. The substance of cereal is, in this light, ideology. And, when we consume it, we ingest more than merely calories. We literally incorporate a sense of who we are-not only through our identification with an image on the face of a cardboard box, but furthermore, for Alexiev, as rational subjects who imagine ourselves as free to choose.

Alexiev examines this ideology of free choice in American consumer culture, so vividly manifested in cereal, by presenting it from the vantage of a Bulgarian peasant. Drawing upon the history of his own family, he tells the story of a rustic who flees Communist oppression and comes to America: The Land of a Million Cereals. As if viewed through the eyes of this Second-World son of the soil, the works in the show exaggerate the aesthetics of cereal and its packaging. Everything is ecstatic: promising total, immediate, gratification in a pallet of fluorescent pinks, yellows, and blues, and-perhaps most importantly-an endless variety of what ultimately amounts to nothing but more of the same thing.

The show includes prints, sculpture, and video. And Alexiev, in the role of the peasant, does battle with Frankenberry, who wields the powerful "golden spoon," - free in every box!

Posted by Nancy Ewart at 9:56 AM No comments:

Women Impressionists at the Legion 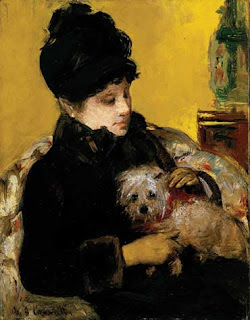 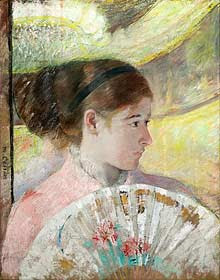 Thanks to a dear friend of mine, I got to see a preview of the upcoming exhibit of women impressionists at the Legion. It's a marvelous show which is long overdue. I enjoy impressionist painting but don't love it as I think it's been overexposed. Of course, that's also amusing, given how controversial these works were when first shown. What I wish we could see in the art - and don't -- is the enormous struggles these women went through to learn their craft and be exhibited. Mary Cassatt is one of my favorite painters but I was disappointed that they didn't have more of her prints which did break new artistic ground when they were first produced. I prefer her clear eyed look at mothers and children to Morisot's sentimentality which is well represented in the show.

Morisot came from very upper class French society and had to withstand savage maternal criticism to pursue her painting studies. Her sister wasn't as focused and settled for marriage; Morisot's biography shows her depression over losing her sister's company and her continual questioning of her own talent. She met Manet by chance and posed for several of his finest paintings. Unfortunately, while she's a fine painter, none of her fiery eyed personality, shown so vividly in Manet's portraits of her, comes across in her works.

Eva Gonzalez was just beginning to mature as an artist when she died in childbirth; she also studied with Manet and her style shows it. Bracquemond was saddled with that most common problem of women artists - an unsupportive and unsympathetic husband so it's a miracle that she produced anything at all. I was pleased to be able to view the exhibit before it's mobbed. It's a pleasant summer show and should educate those who still don't know about women artists. Unfortunately, as the current controversy over Dumas shows, women have continually prove themselves against harsh criticism and unfair disadvantage, generation after generation after generation.

See Eva Lake's blog: http://evalake.blogspot.com/ for a run down of the controversy over Dumas. Mark Harden's Artchive has articles and more images of the work of Cassatt and Morisott

Eva Lake has an excellent post in her blog about “art speak” which reminded me that I wanted to write about the recent controversy at the SFAI.

"This is one thing I have treasured in my recent investigation on how to write. Books on how to write remind you time and time again that you must communicate. This was reassuring after years in mindfuck art wordage."

I have been following an amazing example of "art wordage" in the current issues of the Art Magazine. The SFAI had to withdraw a video performance, which showed animals being battered to death by the artist. The president of the SFAI wrote a long editorial for the Art Magazine claiming censorship and never mentioned what the problem was or why people objected to it. But many of the non-artist responses in the comments section not only made more sense than he did, they put their finger on the ethical and moral issues involved. The artist, Adel Abdessemed, has made a career of showing cruel and sadistic images and covering them over with thick crusts of art speak. Various art magazines describe his images of violence and destruction as elegant and witty. I guess they are if you find videos of slaughterhouses and human torture elegant and witty.

What the writer is obscuring with his "art-speak" is that the videos featured animals being battered to death, in some cases by the artist, in the name of art. I saw the exhibit and was sickened and I've worked in hospitals all my life. What I saw when the exhibit was pulled was a demand, if you will, for ethical, humanistic and humane values rather than an "anything goes in the name of building my career." If the video had shown the torture of humans done as an art form there would have been no mistaking its brutality. I realize that most of us eat meat and that animals are usually not killed in a humane way but this exhibit wasn't about that. It was about promoting a career by using gruesome and controversial imagery.

Now, talk about “mindfuck” art wordage. My comment was attacked by a certain “Jeff” who called me a fascist for objecting to this type of “art,” and declared that mine was a knee jerk reaction – assuming that I had not done any research on the artist, his career or the exhibit in question. So, not only do we have a very misleading statement from the president of the SGAI about the nature of the exhibit but also a lot of name calling by those who won’t discuss the ethical issues involved with (in this case) battering various animals to death in the name of art. 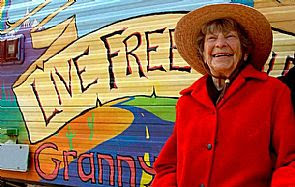 The International Museum of Women is a local organization operating somewhat under the radar. It has no bricks and mortar location; it just surfaces here and there with art exhibits, lectures, and film events, like this one: Women Wielding Cameras: Women, Power, and Politics Film Festival. Two Academy Award-nominated documentaries, a semisecret nationless Arab satellite TV show, and a portrait of the ultimate "little old lady in tennis shoes," Run Granny Run, make up WWC. Mother-activists in Argentina, Rwandan survivors, and 90-year-old senatorial candidates — this is exactly what we want from an international women's museum. Filmmakers Kimberlee Acquaro for God Sleeps in Rwanda and Marlo Poras for Run Granny Run appear after their screenings — and Poras plans to have Doris "Granny D" Haddock with her.
from: http://www.sfweekly.com/

Mertu and Park: Masters of the line 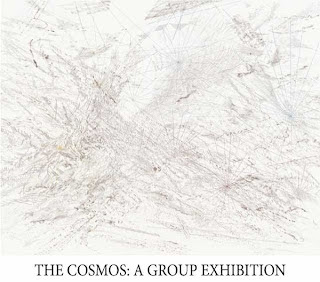 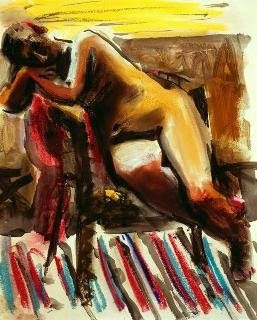 SF is not suffering the summertime blues in the art field. There are two great "must-see" shows: Julie Mertu at Crown Point and David Park at Hackett-Freeman. (essays to follow)