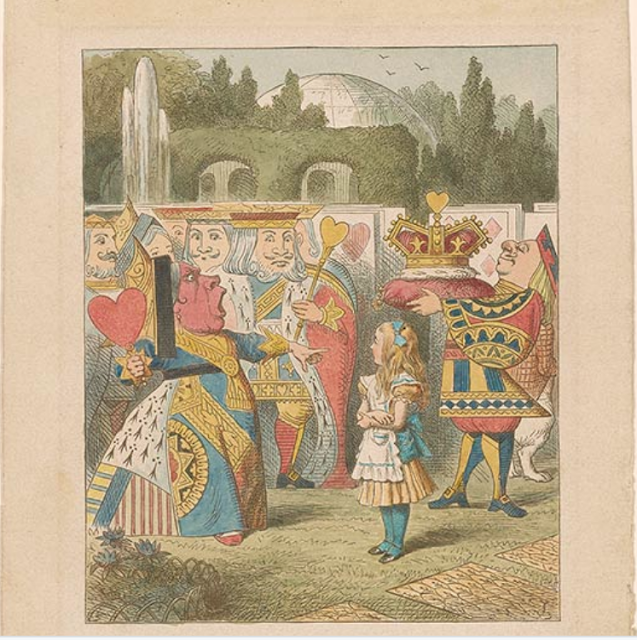 Happy Birthday, John Tenniel! The prominent 19th century artist is best known for his illustrations in Alice in Wonderland! http://bit.ly/1ITis7k 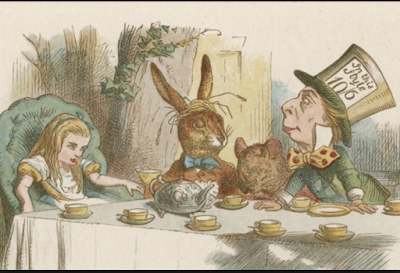 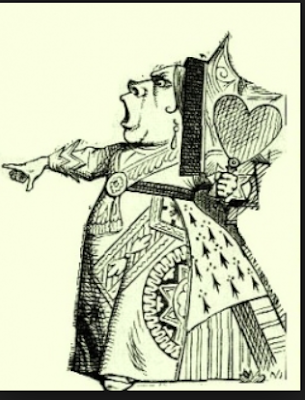 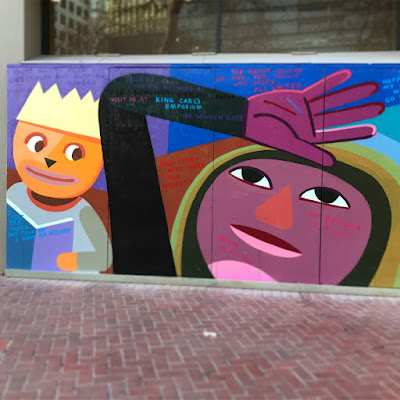 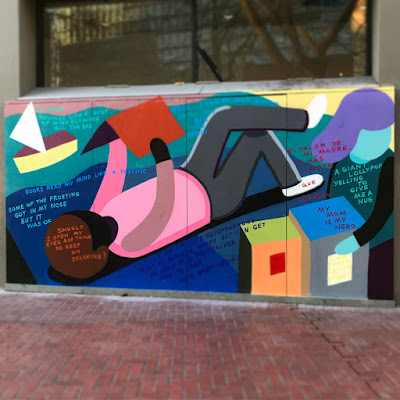 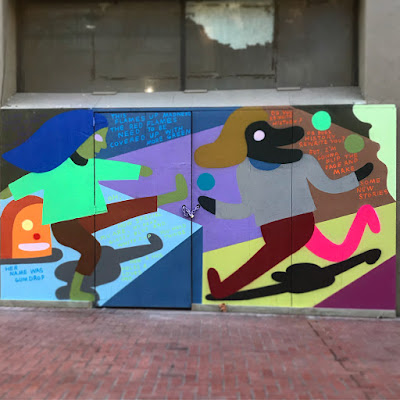 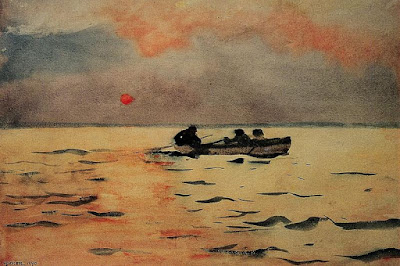 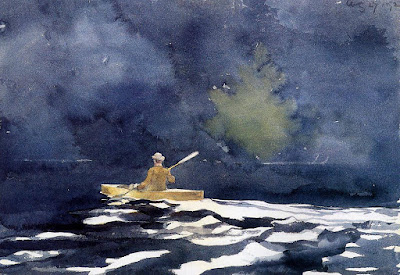 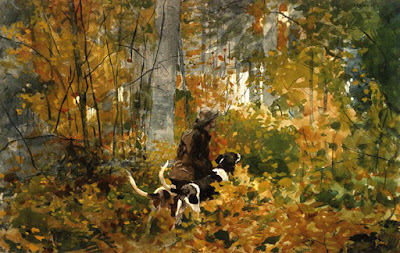 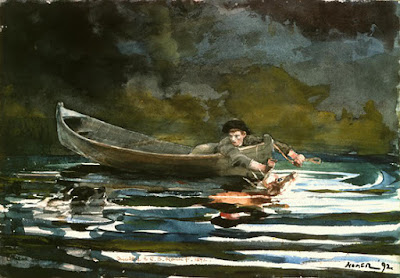 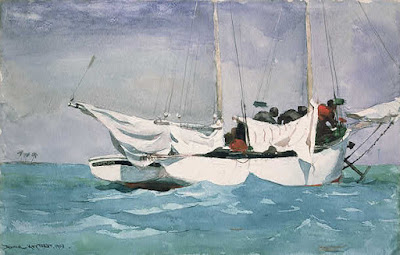 Today is the birthday of Winslow Homer, (1836-1910) a prolific and multitalented 19th century American painter. Born in Boston and raised in Cambridge which was rural at the time, he trained as an illustrator, a career that spanned 20 years.

By 1857, his freelance career was underway after he turned down an offer to join the staff of Harper's Weekly. "From the time I took my nose off that lithographic stone", Homer later stated, "I have had no master, and never shall have any."

During the Civil War, Harper's sent him
to the front lines of the war. There he sketched battle fields, generals and privates alike, work that was dangerous and exhausting. After the Civil War, his paintings were  a nostalgic look at rural America. In 1873, he began using watercolor extensively, making him the foremost watercolor artist of the 19th century. 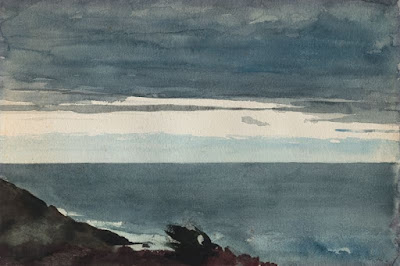 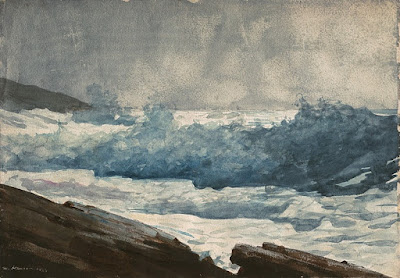 Later on in the 1870's, he became more reclusive, moving to Maine, later traveling to England but returning to the United States. Although he received critical praise, his work never was as popular as John Singer Sargent or more the more traditional Salon paintings. He died in 1910, at the age of 74. 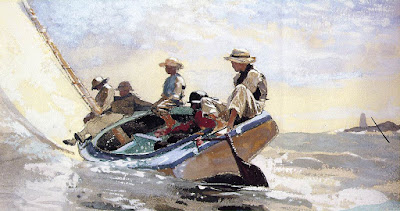 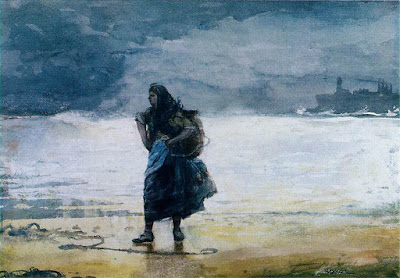 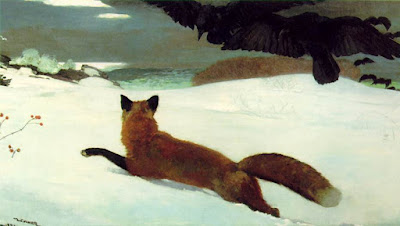 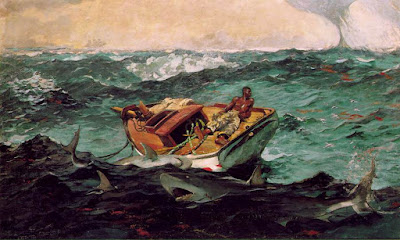 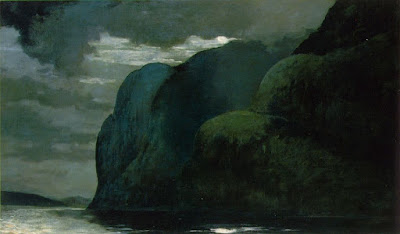 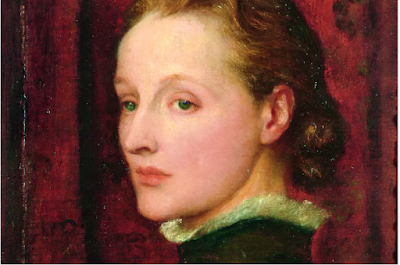 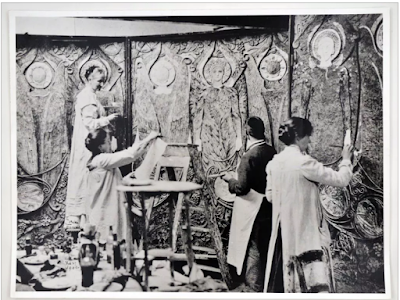 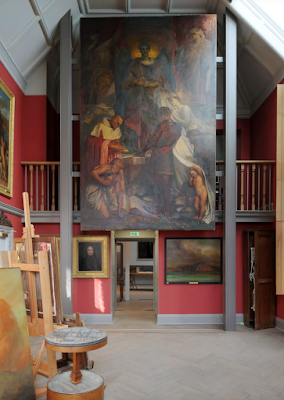 Posted by Nancy Ewart at 1:41 PM No comments: 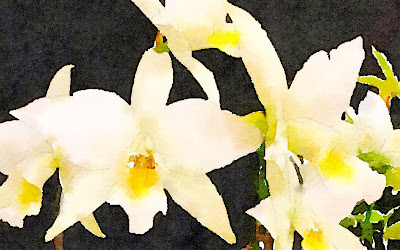 This years Orchid Expo will take place in Golden Gate Park, at the Hall of Flowers. Friday, February 23 - through - Sunday February 25, 2018 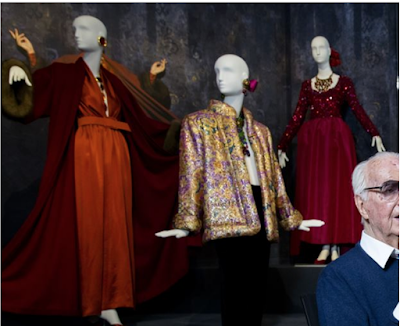 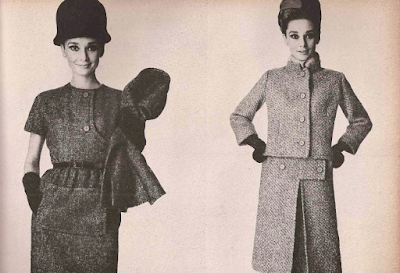 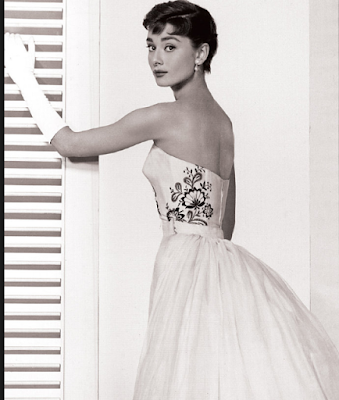 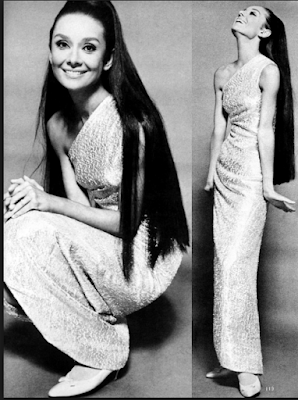 “Casanova, the Seduction of Europe” at the Legion of Honor


Using Casanova as a guide, the current show at the Legion of Honor “Casanova, the Seduction of Europe” is a look at the pleasures available to the upper class, which Casanova, womanizer, gambler, and con man, eagerly embraced and enjoyed. Born in Venice to parents who were both actors, Casanova wore the mask of an actor throughout his long life as he reportedly seduced over 100 women, a man or two and conned an equal number of wealthy European noblemen into supporting his schemes. If one can believe the stories in his 10 volumes of "My Life," he spoke several languages, knew everybody worth knowing and certainly tried to interest them all with his various schemes. All for the benefit of Casanova, of course.

Charles Demsaris, in the SF Chronicle wrote about the show, "The Legion and its museum partners in Boston and Fort Worth started planning the exhibition, which runs through May 28, several years ago. The curators could not have known that their tribute to the most famous womanizer of all time would open at the crescendo of a women’s empowerment movement to be called #MeToo."

"Nor could they have foreseen an ormolu presidency of regal pretension, its occupant yearning for the emoluments of a reign like Louis XVI’s (though not, we can be sure, for an end like that of the last king of France). Given that they are so prescient, do they predict a revolution soon as bloody as the one that followed the period covered by “Seduction of Europe”?


Casanova was in and out of trouble, even in and out of prison. His escape from the notorious Venetian prison was amazing and that incident is represented here by six Carceri d’invenzione, or “Imaginary Prisons” etchings, by Piranesi.

Casanova traveled all over Europe, even making it to the Ottoman Empire, meeting kings and queens, the great and the near great and making and losing fortunes. At the end of his life, he ended up as the librarian to a minor German Count, which is when he wrote his infamous memoirs. “Worthy or not, my life is my subject, and my subject is my life," he remarked.

On display are more than 80 works of art, including paintings, sculptures, works on paper, period furnishings, delicate porcelains, and lavish period costumes, which re-create this luxurious and sparkling aristocratic world of masked balls, palaces, theaters, and operas. These stunning artworks are on loan from institutions including the Musée du Louvre; the National Portrait Gallery, London; the National Gallery of Canada; the National Galleries of Scotland; the Musée des Beaux-Arts, Rennes; and several prominent private collections. 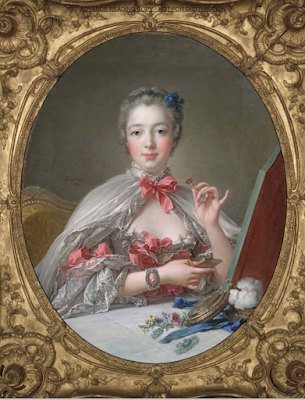 This exhibit cleans up the 18th century and leaves it to the viewers’ imagination to visualize the smells, the beggars, the poverty and the incurable illnesses that were covered over by silk and power or in the case of the poor, simply ignored. It's all about the pretty, the shallow and the sex - the 18th century seems to have been as obsessed with sex as ours is.
As you enter the first gallery, the viewer will see paintings by Canaletto, Longhi and Tiepolo, portraying Venice in all her serene and enchanting splendor. One painting is of St. Marks Square with the Doge’s palace on the left next to another painting is of the Grand Canal, busy with gondola traffic.
Canaletto’s Bacino di San Marco, captures the reality of Venice as a capital of international trade, its main harbor bristling with ships flying the flags of many different nations. 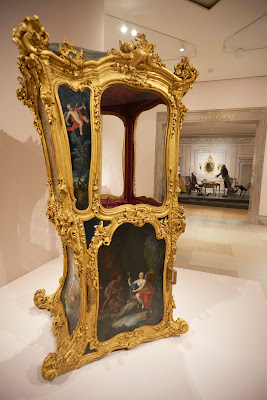 This gallery also contains an elaborately decorated sedan chair, which was used to convey the wealthy around.  With poles threaded through the square brackets of this elegant sedan chair, a pair of servants carried their employer above the dirty streets. Some sedan chairs were even used indoors, to save weary aristocrats from walking across their palace – just so exhausting.

The first gallery to the right of the entrance displays more objects of the elite lifestyle – it is full of porcelain, both Sèvres and Meissen, silver candlesticks, serving platters and a whimsical boar’s head soup tureen. The 18th century elite loved their food! After all, the first cookbook came out of this era. Through an elaborate overhead video projection, visitors can sit at a “dining table” onto which is projected or “served” a historically accurate, aristocratic three-course feast, using period porcelain and silver pieces.
The highlight in the next gallery is the Legion of Honor’s own “Thalia, Muse of Comedy” (1739) by Jean-Marc Nattier. In the painting, Thalia holds a mask in one hand and uses the other to lift a plush velvet curtain and playfully invite us into the world of comedic theater. Charming and playful, the mask she holds in her hand tells is that this is all a play and let the playgoer enjoy the comedy. The price, never mentioned because that would not be cool, will come in the morning. 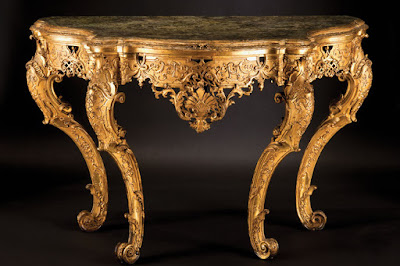 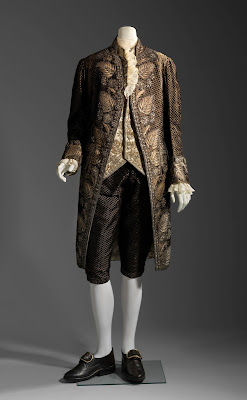 As the exhibit continues, the walls are filled with paintings of courtesans, gods and goddesses cavorting in idealized settings – seduction couched in mythological terms with acres of silken flesh, beautiful people all intent on pleasure but portrayed in a  fashion so as to escape the censorious eyes of the Church. There are several examples of Rococo furniture, gilded, curved and decorated,  Cases full of exquisite tiny figurines and fans show how the elite surrounded themselves with luxury, even to the smallest object. A few tableaux display the fashions of the era, with elaborate gowns, waistcoats and handmade lace collars and cuffs, which could bankrupt even the wealthiest.

“Casanova, the Seduction of Europe” ends with portraits of the significant intellectual figures of the age – from Voltaire (who dismissed him as a parveneu) to Rousseau to  the American Benjamin Franklin.

These paintings are a sharp reminder that underneath the power and paint, a political earthquake was brewing, fanned by the discoveries of the French enlightenment – one that overthrew Casanova’s world ten years after his death.

Tallyrand, French nobleman and statesman whose life spanned the 18th century into the 19th was rumored to have said, “Whoever did not live in the years neighboring 1789 does not know what the pleasure of living means.”  But no matter how golden that age seemed in retrospect, the aristocrats' world of power, privilege and sex, sex, sex was on the edge of a precipice. The starving masses who watched the parties with sullen hate would not remain silent forever.

At a time of heightened awareness to the problems posed by 18th century art and attitudes, and in the era of #MeToo (Charles Desmaris, The Chronicle),  the Legion of Honor has added programs that promise to take up such questions. All will be held in the museum’s Gunn Theater and all are free after museum general admission. See the museum website for details.

“Female Agency in the Age of Casanova”: With Charlotte Gordon and Fara Dabhoiwala. 10:30 a.m., Sunday, April 8.

“Reckoning with the Past: A Forum:” Led by Julia Bryan-Wilson. Saturday, May 12.