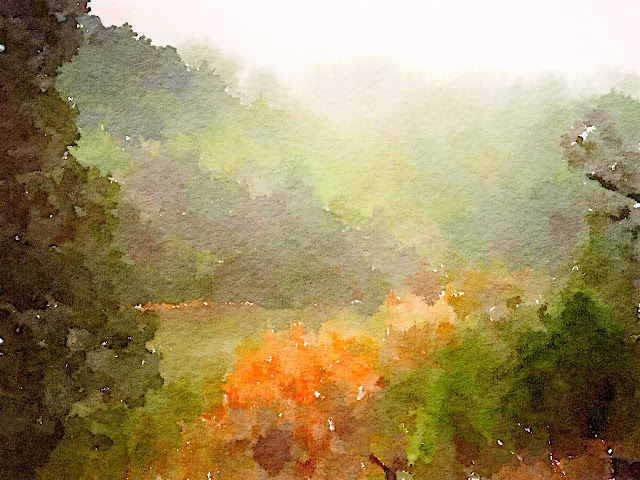 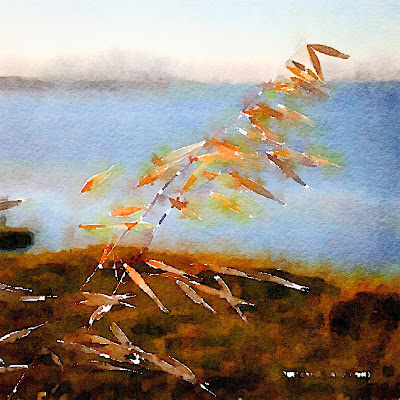 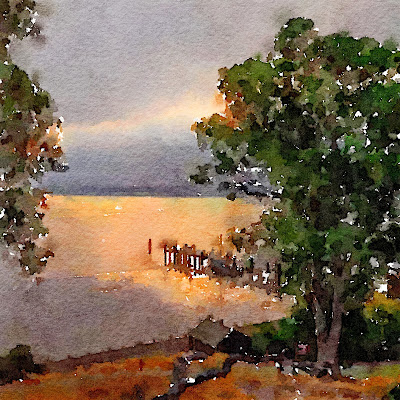 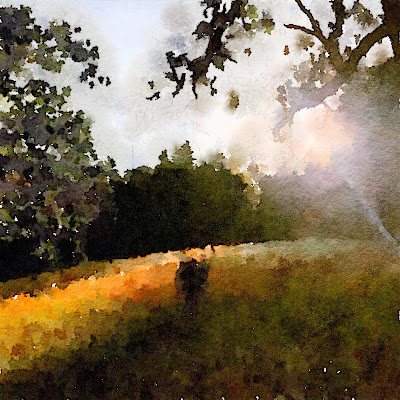 Die happily and look forward to taking up a new and better form. Like the sun, only when you set in the west, can you rise in the east. Rumi

Tonight at sunset walking on the snowy road,
my shoes crunching on the frozen gravel, first

through the woods, then out into the open fields
past a couple of trailers and some pickup trucks, I stop

and look at the sky. Suddenly: orange, red, pink, blue,
green, purple, yellow, gray, all at once and everywhere.

a prayer for being here, today, now, alive
in this life, in this evening, under this sky.


Artwork @ Nancy Ewart. Inspired by photos by Nina Savich and Elizabeth Hopkins
Posted by Nancy Ewart at 9:35 AM 1 comment: 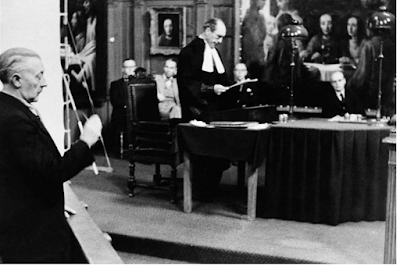 It seems appropriate that, as we end this year with the prospect of dealing for four years, with one of the most unethical men ever elected to the presidency, that today is also the birthday of another unethical forger.

Except that Han van Meegeren did not cause bodily harm, unlike what is coming at us with the force of a tsumani

December 30, 1947. Han van Meegeren (10 October 1889 in Deventer, Overijssel - 30 December 1947 in Amsterdam), born Henricus Antonius van Meegeren, was a Dutch painter and portraitist and is considered to be one of the most ingenious art forgers of the 20th century. In this image: 57 yr old Dutch painter Han van Meegeren, left, seen in the defendants box before the Amsterdam court, Oct., 1947, Amsterdam, The Netherlands. Van Meegeren is charged with fraud for faking pix of the old masters Vermeer and Pieter De Hooch, signed them, and sold them for Approx $700,000. From left to right: Van Meegeren, an X-Ray screen to prove falsifications, and public prosecutor Dr. H. Wassenbergh. In the rear is The Last Supper.
Posted by Nancy Ewart at 9:59 AM No comments: 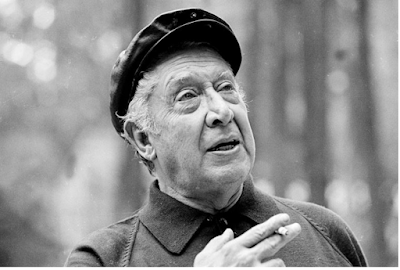 December 29, 1896. David Alfaro Siqueiros (born José de Jesús Alfaro Siqueiros, December 29, 1896, in Chihuahua, Mexico - January 6, 1974, in Cuernavaca, Morelos) was a Mexican social realist painter, known for his large murals in fresco. He, Diego Rivera, and José Clemente Orozco established Mexican Muralism. He was also a Stalinist and member of the Mexican Communist Party who participated in an unsuccessful attempt to assassinate Leon Trotsky in May 1940. In this image: David Alfaro Siqueiros, 73, Mexican muralist, painter and activist, is shown in Mexico City, Mexico, on Sept. 10, 1970. 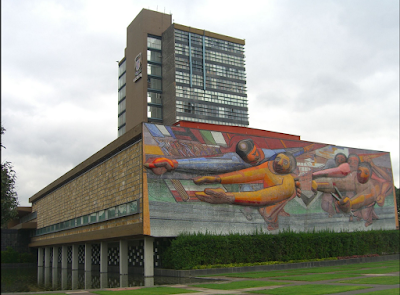 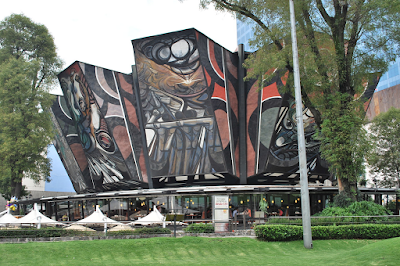 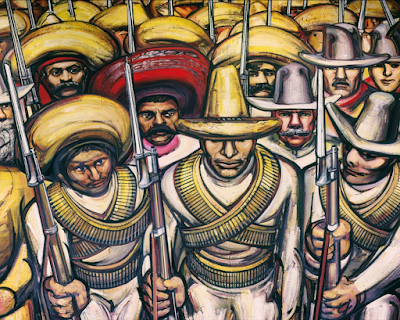 Artsy
Posted by Nancy Ewart at 12:08 PM No comments:

I suppose every year sees the death toll of beloved public figures but this year seems worse than most.

Notable deaths in 2016 from the LA Times: LA Times
Posted by Nancy Ewart at 10:03 AM No comments:

I am ready to see the end of this year. First the whole line up of entertainers that I loved, starting with Alan Rickman, then, the Republic that I cherished and now, Carrie Fisher as well.

http://www.nytimes.com/2016/12/27/movies/carrie-fisher-dead-star-wars-princess-leia.html?hp&action=click&pgtype=Homepage&clickSource=story-heading&module=photo-spot-region&region=top-news&WT.nav=top-news
Posted by Nancy Ewart at 10:39 AM No comments: 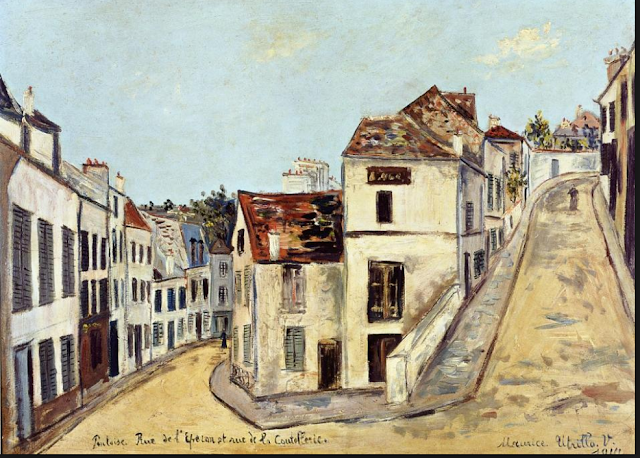 December 26, 1883. Maurice Utrillo (born Maurice Valadon (26 December 1883 ? 5 November 1955), was a French painter who specialized in cityscapes. Born in the Montmartre quarter of Paris, France, Utrillo is one of the few famous painters of Montmartre who were born there.

Although his life also was plagued by alcoholism, he lived into his seventies. Maurice Utrillo died on 5 November 1955 in Hotel Splendid in Dax of a lung disease, and was buried in the Cimetière Saint-Vincent in Montmartre.

Happy Holidays to All Religions 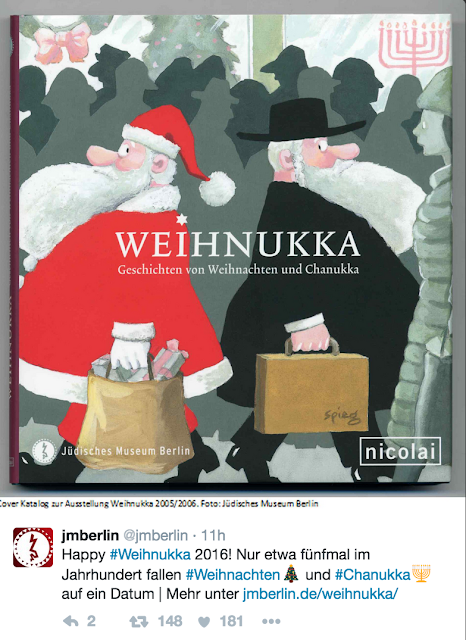 This is the time of the year that everybody comes out with their 10 best. I will have to look back on my notes to see what strikes me as worth remembering - it's not been a very good year. But right now, the Contemporary Jewish Musum has another one of their knock out shows. Forget the oversized geometric pieces of Stella at the de Young and go over the the CJM where the show, "Inherited Memory" looks at memories imprinted in our DNA . The diverse works by the show's 24 artists don't reflect their own memories, but haunting evocations of the past, often tragic events.

The Contemporary Jewish Museum is the only Bay Area museum open on Christmas Day with a full day's worth of programs and workships for families. Admission is free on Christmas Day

The Contemporary Jewish Museum's Community Day is an admission-free, fun-for-all extravaganza that has become an annual tradition for Bay Area families. Explore the galleries, create art, and move and groove to live music! Bring your family and friends and enjoy an exciting day at The Museum.

The current show, “From Generation to Generation: Inherited Memory and Contemporary Art” looks at the memories of 24 artists working via the imagination, collective DNA, knowledge - whether of family or history - of the Holocaust, struggles for social justice in the past.

Such a broad topic could have made for a very uneven show but the painfulness of the memories and the present reality of war and bigotry and violence give the works an extra sharp edge and poignancy. Director Lori Star speaks of rememberance and transformation, more important now than ever, as fake hate and racist news and violent bigotry are breaking through the thin crust of civilization.

This exhibition expands on the groundbreaking work by Dr. Marianne Hirsch on postmemory, defined as “the relationship that the ‘generation after’ bears to the personal, collective, and cultural trauma of those who came before—to experiences they ‘remember’ only by means of the stories, images and behaviors among which they grew up.

One of the most powerful testimonies to the horror of the past is Lisa Kokin’s “Inventory” (1997), a history of ordinary people told through the ordinary objects they would have left behind. Simple things such as buttons, keys, broken glasses, found in thrift shops and flea markets, are encased in hog gut squares, a golden organic repository, lined up along one whole wall - a memorial to honor their stolen lives.

In whimisical Alien Souvenir Stand British artist Ellen Harvey imagines an Earth no longer occupied by humans but used as a tourist destination for extraterrestrials. Repurposing a hot dog stand as a postcard souvenir stand for the aliens, the artist articulates a complicated system of pillars, or columns, favored by the humans that no longer exist. Harvey decided to focus on the pillar as subject when visiting Washington DC from New York and recognizing that pillars and neo-classical architecture in general have been loved and used by people throughout history with various meanings. The aliens have been left to interpret this strange architecture for themselves.

David "Chim” Seymour has written a line from John Updike: "What is the past, after all," he laments, "but a vast sheet of darkness, in which a few moments, picked apparently at random, shine?"