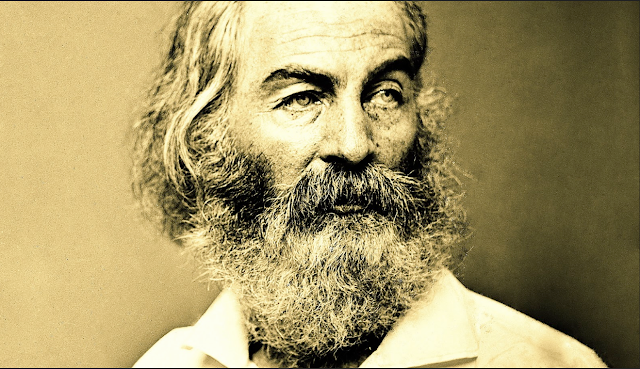 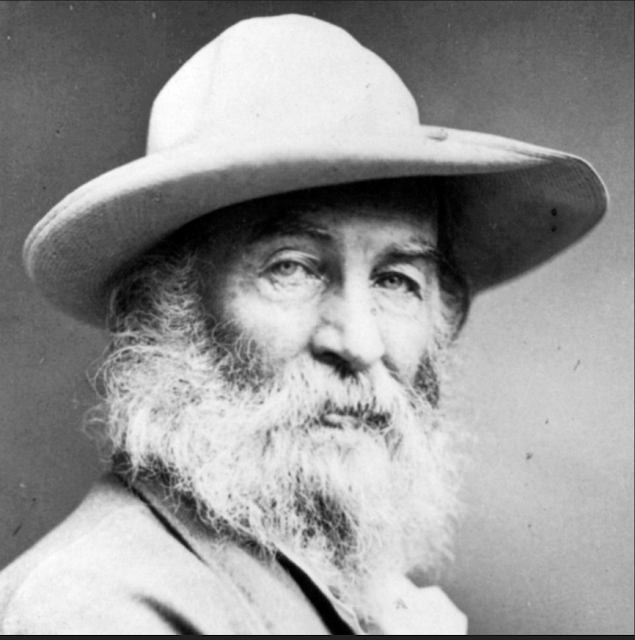 " I celebrate myself and sing myself,

And what I assume you shall assume,
For every atom belonging to me as good belongs to you.
I loafe and invite my soul,
I lean and loafe at my ease observing a spear of summer grass.
My tongue, every atom of my blood, form’d from this soil, this air,
Born here of parents born here from parents the same, and their parents the same,
I, now thirty-seven years old in perfect health begin,
Hoping to cease not till death.
Creeds and schools in abeyance,
Retiring back a while sufficed what they are, but never forgotten,
I harbor for good or bad, I permit to speak at every hazard,
Nature without check with original energy.

Walt Whitman, American poet, journalist, essay writer and celebrator of the human form, was born on May 31, 1819 in West Hills, New York. "Leaves of Grass," his masterpiece is a landmark in the history of American Literature.

Browse available titles through the link below:
https://tinyurl.com/ycuvbqd8

Taking a walk through Leaves of Grass: https://www.poets.org/poetsorg/text/taking-walk-through-leaves-grass

Posted by Nancy Ewart at 2:41 PM No comments:

Elsworth Kelly. Born on this day in 1922 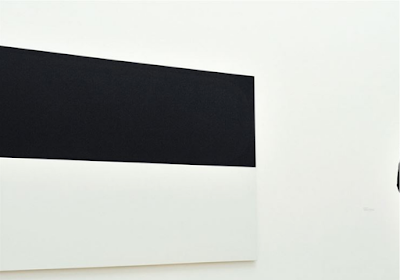 May 31, 1923. Ellsworth Kelly (May 31, 1923 - December 27, 2015) was an American painter, sculptor, and printmaker associated with hard-edge painting, Color Field painting and minimalism. His works demonstrate unassuming techniques emphasizing line, color and form, similar to the work of John McLaughlin and Kenneth Noland. Kelly often employed bright colors. He lived and worked in Spencertown, New York. In this image: White Relief with Black III' by the artist Ellsworth Kelly 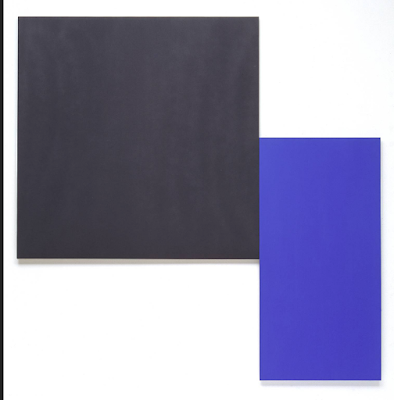 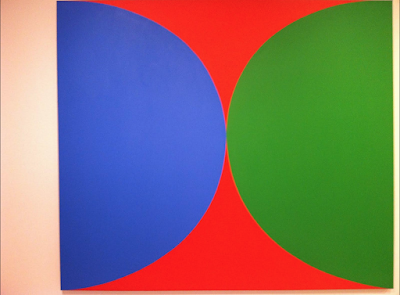 Another post WW II American painter whose work is devoid of meaning and emotion. It's all about shape and color and makes great wall decoration for anybody who can afford a large wall space.

Posted by Nancy Ewart at 8:46 AM No comments: 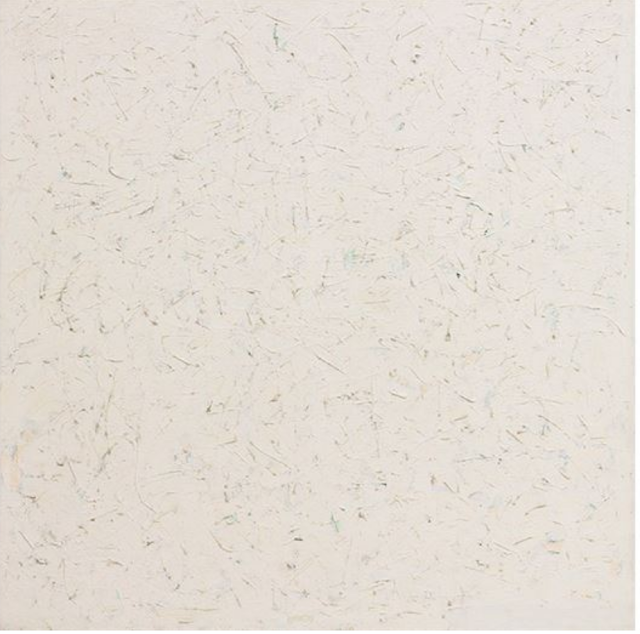 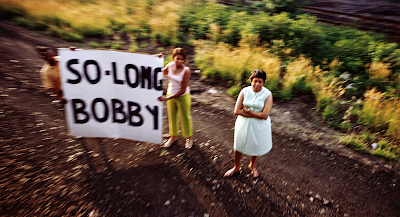 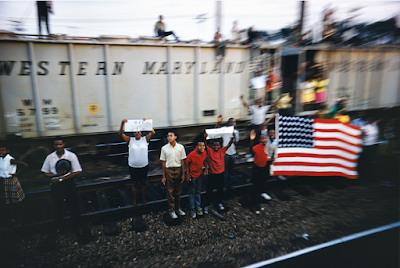 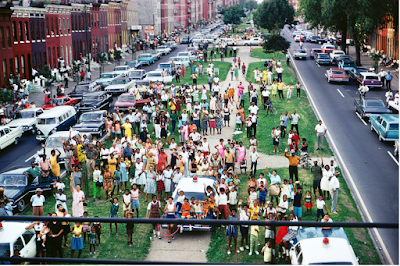 It seems appropriate that on Memorial Day that I should mention the murder of Bobby Kennedy, the one of a trio of important murders (JFK, MLK, Medgar Evers), that turned the trajectory of our country toward the right.

The Train: RFK’s Last Journey” is an ingenious and, in a surprising way, affecting exhibition that opened last month at the San Francisco Museum of Modern Art. Although the train in question is the one that, almost fifty years ago, carried Robert Kennedy’s body from New York City to Washington, D.C., for burial in Arlington Cemetery, the show is not about Kennedy. The show is about death—or, more exactly, about the relationship between photography and death......

Fusco’s photographs are amazing in pretty much every way. Technically, the Kodachrome film produces a highly saturated image. It was a hot day, but it was June, and the light—Fusco seems to have been shooting people on the west side of the tracks, which must have been a challenge as the sun dropped in the sky—is an almost palpable, weighty presence.


As for the faces themselves, it was emotion that brought people out to stand waiting, sometimes for hours, beside the tracks in the heat—and those emotions are legible. Fusco must have realized that it was faces that he wanted, and he compensated for the movement of the train by focussing on a single person and moving his camera while he pressed the shutter, so that individual faces are often captured in focus against a slightly blurred background. There is a nakedness in them that is rare in public—these people don’t think that anyone is looking at them—a nakedness that many photographers have tried to capture. It’s here.

From the New Yorker: https://www.newyorker.com/culture/photo-booth/robert-f-kennedys-funeral-train-fifty-years-later


During WW II, Rosevelt asked us..."What does it mean to be an American."Rockwell's strong paintings show the important principles that we were fighting for and still should be fighting for..freedom of speech, freedom of worship, freedom from want, freedom from fear. When the documentary on Rosevelt aired on PBS, I was trying to discuss it with some friends and all they could do was harp on his flaws and faults. But he also gave us a lot more - and Rockwell beautifully portrays those ideals, painted under the duress of WW II.

77 years since he gave this speech. https://fdrlibrary.org/four-freedoms

Posted by Nancy Ewart at 6:31 PM No comments: 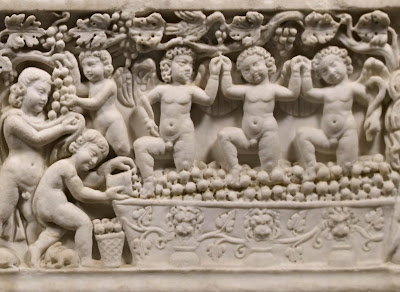 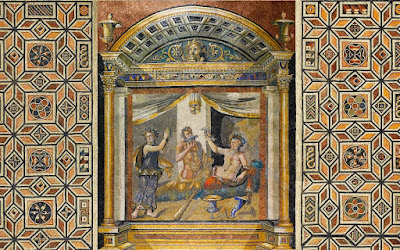 I almost missed National Wine Day which was yesterday (rather appropriate for Memorial Day Weekend - but that's probably beer, more beer). I can't resist a few wine-related depictions from antiquity.

Raise a glass and perhaps try an ancient toast: "Dignitas Amicorum Pie Zeses Vivas!
Posted by Nancy Ewart at 9:34 AM No comments:

Margret Fuller. Born on this day in 1810 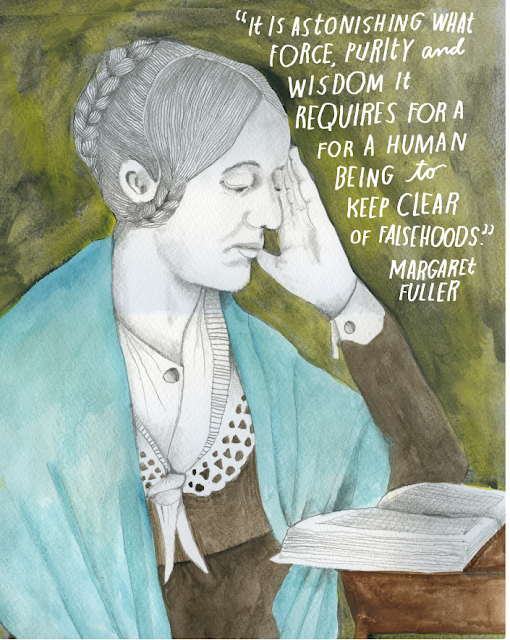 “The mind is not … a highway, but a temple, and its doors should not be carelessly left open.Two years before Transcendentalist grand dame Margaret Fuller (May 23, 1810–July 19, 1850) inspired the women’s suffrage movement and laid the foundation for modern feminism with her 1845 masterwork Woman in the Nineteenth Century, she published something very different in subject, though not in sensibility and spirit: Summer on the Lakes(public library | free ebook) — the record of her experiences and observations traveling westward from her native New England, among which are the most stunning literary portrait of Niagara Falls I’ve encountered and a sorrowful account of the fate of the displaced Native American tribes, with whom Fuller sympathized and spent time.

Upon returning home, Fuller persuaded the Harvard library to grant her research access to its book collection, the largest in the nation. No woman had been previously admitted for more than a tour.

When she completed the book, her first, she published it under the ungendered initials S.M. Fuller, fearing that her sex would compromise the book’s reception — a common practice among women writers of nonfiction that would stretch well into the twentieth century. (Almost a hundred years later, marine biologist and writer Rachel Carson published her own stunning debut as R.L. Carson a quarter century before she catalyzed the modern environmental movement under her full name.)

With its unusual combination of crisp journalistic observation and lyrical philosophical reflection, Fuller’s first book was an instant success, selling better and faster than the debut of her intimate friend and fellow Transcendentalist monarch Ralph Waldo Emerson.

In one of the most profound passages in the book, Fuller examines the tension between physical reality and metaphysical thought by staging an allegorical dialogue between four perspectives she terms Old Church, Good Sense, Self-Poise, and — the one with which she herself identifies most closely — Free Hope.
Good Sense, modeled on Emerson, issues to Free Hope a blanket admonition against all mystical meanderings:

All around us lies what we neither understand nor use. Our capacities, our instincts for this our present sphere are but half developed. Let us confine ourselves to that till the lesson be learned; let us be completely natural, before we trouble ourselves with the supernatural.
More at the link: 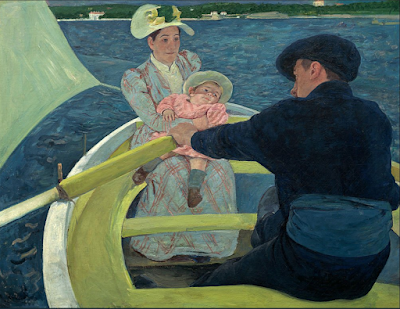 Boating party, 1893. Of course baby is along and nobody has a life jacket. Living dangerously, with Mary Cassatt, born OTD 1844.


Cassatt, the daughter of a wealthy Pennsylvania businessman, became a student at the Pennsylvania Academy in 1861 and by 1866, moved to Paris. Her teas were a mecca for younger women artists, she was generous with introductions and her professional commitment was an inspiration.

Unlike Alcott, whom Chadwick has paired her with in her discussion of 19th century American women, Cassatt avoided the conflicts facing the woman artist by her wealth, class position, her strong personality and her refusal to marry. Other women were caught within an ideology of sexual difference which gave privileges to males and often forced women to choose between marriage and a career. 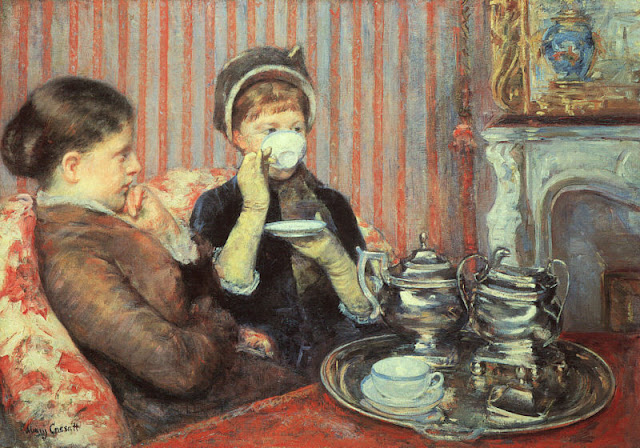 It was Degas who encouraged Cassatt to exhibit with the Impressionists after the Salon rejected her work. “At last I could work with complete independence without concerning myself with the eventual judgment of a jury. I already knew who were my true masters. I admired Maent, Courbet, and Degas. I hated conventional art. I began to live.” Degas was equally impressed by Cassatt's work, declaring “There is a woman who feels things like me.” Thereafter, Cassatt was the only American who was invited to show work with the group who exhibited under the name, Societté Anonyme. Cassatt regularly exhibited her work with the French Impressionists, contributing paintings in 1879, 1880, 1881, and to the last exhibition in 1886. (Mary Cassatt's contributions ...) 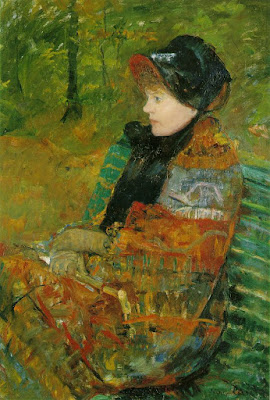 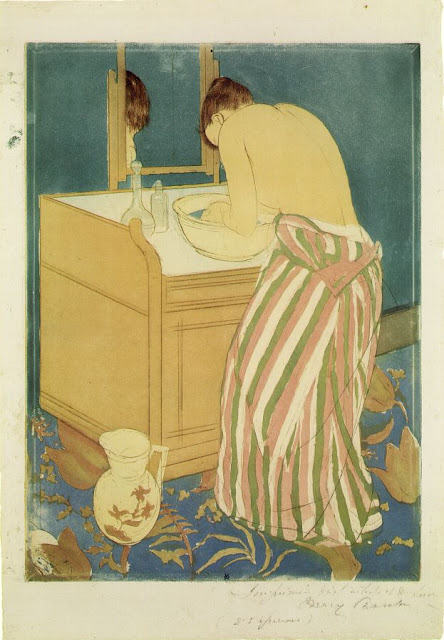 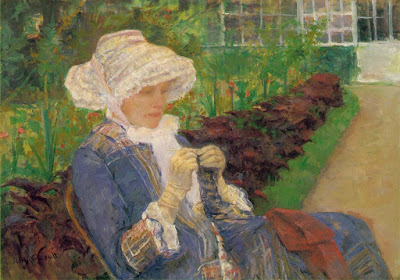 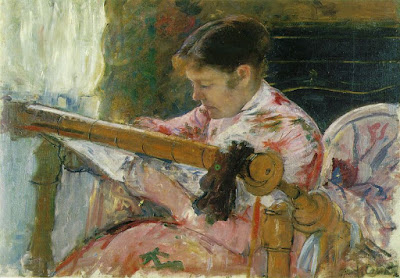 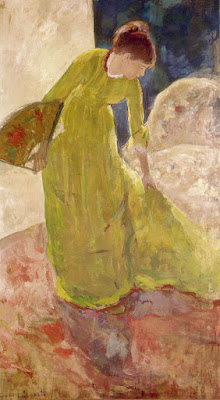 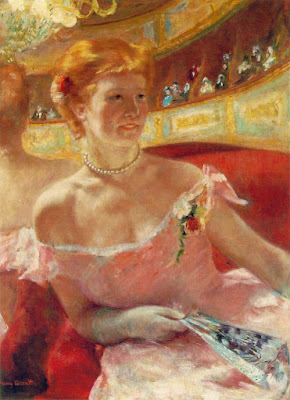 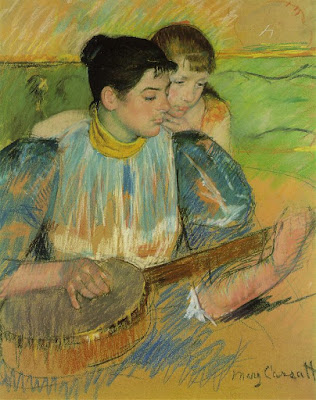 "...Cassatt had completely absorbed from her Impressionist colleagues Caillebotte, Degas, and Renoir, as well as her study of Japanese prints, the modern idea that the background of a painting might be as significant as the foreground. She understood that establishing a tension between the two would capture the immediacy of vision, as well as mimic or falsify by turns, the focal shifts of human sight and perception. Thus the space and the objects in Portrait of a Little Girl that surround the figure seem to be in motion; the floor lifts up, and the chairs appear to have slid into various, almost accidental positions, not unlike that of the young girl. These changing elements affect our perception of the painting's psychological subtext: in contrast to [one] made clear by ... direct, outward gaze, that of Cassatt's "subject" is more complicated and elusive; the little girl's sideways glance, which avoids ours, makes her independent of us. She is in a world of her own, one that adults could fully understand only by recapturing their childhood personae."

- From "Mary Cassatt: Modern Woman", by Judith A. Barter

* Mary Cassatt: Modern Woman, edited by Judith A. Barter. Catalog from the blockbuster show of 1998.