"Earthquake' at the California Academy of Sciences 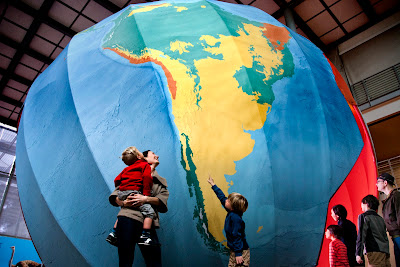 http://www.examiner.com/article/earthquake-opens-at-the-academy-of-science
Posted by Nancy Ewart at 6:04 PM No comments:

Memorial Day and a speech by Joe Biden

The full speech is raw and powerful - found via one of my favorite blogs, "As Time Goes By." She's posted the video which is not up anywhere else.

"On Friday, Vice President Joe Biden spoke to a group of Gold Star Families - those who have lost a loved one in war. Poor ol' Joe is often chastised for speaking out of turn, of putting his foot in his mouth, of being a reliable gaffe machine. But not on this day.

Biden's extraordinary speech, in the words of MSNBC's Rachel Maddow, was "raw and emotional" and, I would add, personal and wrenching and true and good."

http://www.timegoesby.net/weblog/
Posted by Nancy Ewart at 11:49 AM No comments: 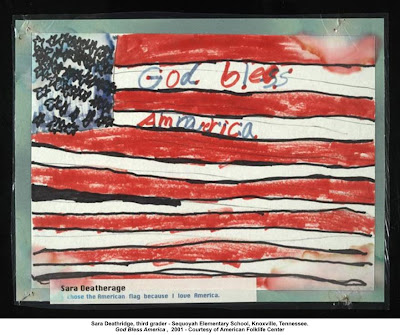 At its inception, the Library’s iTunes U site includes historical videos from the Library’s moving-image collections such as original Edison films and a series of 1904 films from the Westinghouse Works and original videos such as author presentations from the National Book Festival, the "Books and Beyond" series, lectures from the Kluge Center, and the "Journeys and Crossings "series of discussions with curators.

Smithsonian Magazine on line has an excellent series of essays, one on the creation of Arlington Cemetery.

What is sad and indeed, disgusting, are the ugly comments from those who are still fighting the Civil War on the side of the South. Many apparently still believe that the US Government had no right to end slavery and that Robert E. Lee's slave plantation was illegally and shamefully annexed to hold the war dead.

When I watched Ken Burn's wonderful series on the Civil War, I remember thinking that the South had triumphed in the end. Blacks were relegated to slavery, in reality, if not in law. It's a battle that is still being fought, now more bitterly than ever as we have a man of mixed race in the White House.

http://www.smithsonianmag.com/search/?keyword=Memorial+Day
Posted by Nancy Ewart at 12:05 PM No comments:

'Phantoms of Asia' at the Asian Art Museum 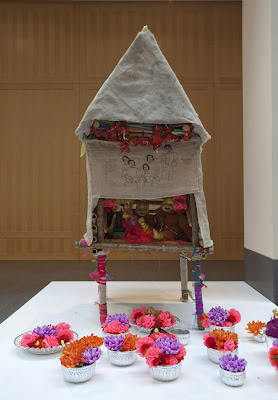 The new show at the Asian Art Museum is at the top of my Memorial Day Weekend picks but the rest of the shows around the bay ain't half bad either.

The red lotus that was just installed in the Civic Center Plaza is the outside symbol of an exciting, exhausting and bold exhibit inside the revamped  Beaux Arts building that formerly housed the old San Francisco Public Library.

When you enter the Asian, the first thing you see is this stunning piece, stretched across the wall of the court. Made with black masking tape, the impact is astonishing. The rest of the show is equally amazing - not all pieces work that well but what is worth respecting is the Asian's courage in exhibiting such cutting edge contemporary art and their ingenuity in pairing 21st century art with the more classical pieces in the collection. There will be a fuller review to come but this will do for starters. 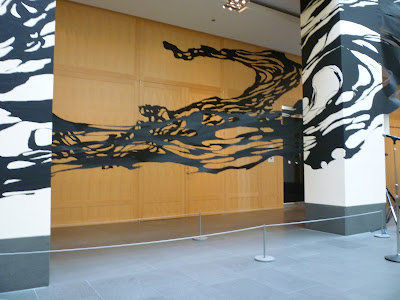 Korean-born New York based artist Sun K. Kwak makes the invisible visible using a surprisingly simple medium: black masking tape. Through a process infused with an element of performance, Kwak channels surrounding energy to manifest a movement of lines, liberating the space and transforming it into a new pictorial reality. 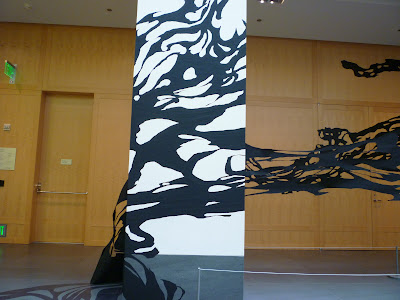 For Phantoms of Asia, Kwak creates a site-specific installation for the museum’s North Court, which will not be seen again after the exhibition closes.

“At the close of an exhibition,” Kwak explains, “the space once again becomes blank, as the black tape of the drawings is pulled off the wall and thrown out. This process of emptying the space is a metaphor for the ephemeral nature of life and my acceptance of the emptiness of that nature. Yet the drawing lives on in viewers’ memories as an imprint that leaves the space forever altered.”(photographs are mine) 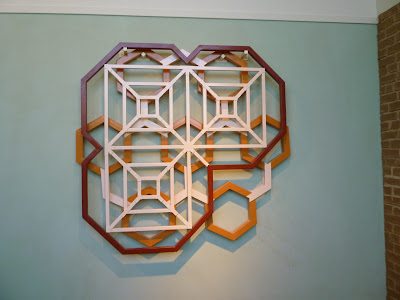 http://www.examiner.com/article/orange-peel-harbor-seal-hyperreal-at-the-chinese-cultural-center
Posted by Nancy Ewart at 8:25 PM No comments:

Choi Jeong Hwa's 24-foot kinetic red lotus being inflated in San Francisco's Civic Center Plaza. The installation is part of Phantoms of Asia: Contemporary Awakens the Past at the Asian Art Museum.

That giant red lotus that sprang up in San Francisco's Civic Center Plaza on Saturday - a 24-foot-tall "Breathing Flower" of kinetic fabric in the form of the ancient Asian symbol of spiritual illumination and renewal - is the most visible artwork in an exhibition that explores the invisible energies and forces summoned by artists in 200 B.C. - and just last week.

The World of Your Senses, Tibetan art at the Exploratorium 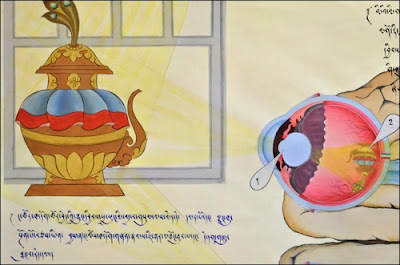 The World of Your Senses, briefly on display at the Exploratorium, draws on the traditions of 17th century Tibetan medical text paintings to interpret descriptions of the senses found in science textbooks today.

The seven monks and two nuns, who live in exile in India, are here to present a collection of 15 paintings depicting sight, sound, smell, taste and touch. The canvas paintings depict colorful anatomical illustrations of the senses from both the Buddhist and western scientific perspectives.

The panels were painted in the traditional Tibetan “thangka” style, which typically were religious paintings of Buddhas and deities, not human anatomy. The Buddhist perspective paintings drew upon 17th century Tibetan medical text paintings that were used to instruct Tibetan medicine to traditional healers. Tibetans believe that sight, sound, smell, taste, and touch are perceived by five consciousnesses. The sixth consciousness is the mind. 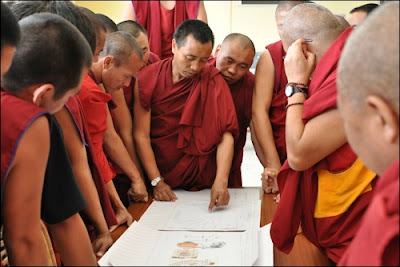 World of the senses production meeting.

Conceived and created by monks participating in an intensive training program for monastic science leaders, the exhibition is designed to engage India’s Tibetan community in an exploration of human sensory perception from both scientific and Tibetan Buddhist perspectives.

The exhibit was the latest effort in a 10-year-old initiative to teach science to Tibetan monastics, started at the behest of the Dalai Lama. In 2001, the Library of Tibetan Works and Archives in Dharamsala, the Dalai Lama’s exile home in India, and the U.S.-based Sager Family Foundation began bringing Western scientists and educators to India to teach science to Tibetan monks. India is home to about 120,000 Tibetans – the largest population outside of Tibet.

Tibetan children in India learn science in school, but Tibetan monks and nuns have followed a traditional curriculum largely unchanged for centuries. Until a decade ago, Tibetan monks had learned no science at all. Since then it’s been a crash course in science for some monks, with classes on topics ranging from cosmology to neuroscience. The nuns are among the first ever to be trained to become science education leaders for their communities. 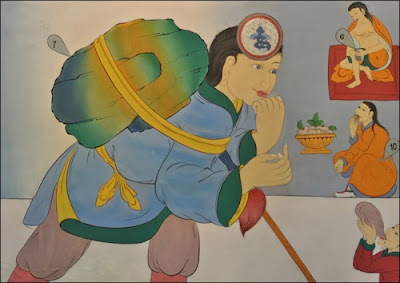 The visiting Tibetans are acting as docents at the Exploratorium, sharing the Buddhist perspective of the five senses and, incidentally, by just being themselves, acting as living examples of Buddhism engaging in the world.

Master painter Jampa Choedak created a painting of microscopic marine organisms found in the bay. His work will be on permanent display in the Exploratorium
when it moves to a new home on Pier 15 in the spring of 2013.

review: http://www.examiner.com/article/the-world-of-the-senses-on-view-at-the-exploratorium-san-francisco
Posted by Nancy Ewart at 8:24 PM No comments:


From a poem by Paul Verlaine. Singer - Juliette Prochin, music by Reynaldo Hahn

The white moon / shines in the woods./ From each branch / springs a voice / beneath the arbor. / Oh my beloved.

The pond reflects, / like a deep mirror, / the silhouette / of the black willow / where the wind weeps. / Let us dream! It is the hour.

A vast and tender / peacefulness / seems to descend / from the firmament / made iridescent by the stars. / It is the exquisite hour!
Posted by Nancy Ewart at 7:10 PM No comments:

Wild Women Don't Get the Blues

Posted by Nancy Ewart at 6:36 PM No comments: