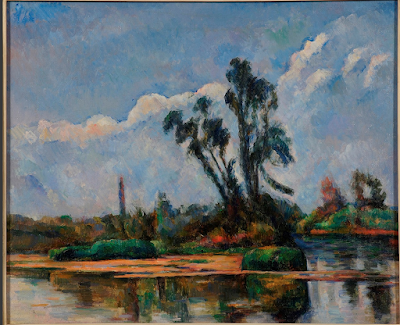 Born on April 26, 1798, in Southern France, Delacroix's art formed the link between the realistic art of the past and modernism, ultimately having a profound effect on the Impressionists and hence, on all art of the 20th century. His bravura brushstrokes and bold use of color make his art revolutionary for the time. His legal father was known to be infertile so Prince Tallyrand has been been suggested as his "real" father. The official art world rejected his paintings but Delacroix waa able to achieve widespread public popularity.

"Delacroix is, with Turner, the greatest mater of romantic painting.. . . moved by a passionate desire to express their feelings though color and a deep pessimism. " Kenneth Clark. The Romantic Rebellion

Tallyrand protected and helped Delacroix throughout his career,  He went on to study art in the usual way for the 19th century and achieved early success with his huge works depicting tragedies - first "The Barque of Dante" in 1822 and in 1824, his portrayal of the massacre at Chios, a powerful, colorful painting of dying Greeks massacred by the Turks.

Delacroix was widely read, with interests ranging from 18th century works of the French Enlightenment to contemporary novels. His politics were also progressive as he advocated for the end of Bourbon rule and supported the Greeks who were fighting for their independence against the Turks. All of these topics were used in his paintings.


In 1832, Delacroix was able to travel to Spain and North Africa. His extensive journals and notes provided inspiration for the rest of his career.

His health was poor and from 1844 until his death in 1863, he lived in a small house in the country, often painting flowers but also involved in the progressive art and political movements of the time, still considered a leader of the Romantic movement. He died on August 13, 1863 with his faithful housekeeper by his side.