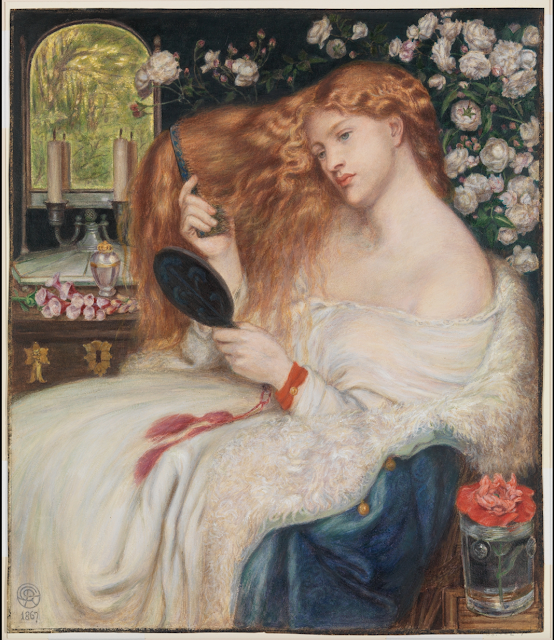 Fascinated by women’s physical allure, Rossetti here imagines a legendary femme fatale as a self-absorbed nineteenth-century beauty who combs her hair and seductively exposes her shoulders. Nearby flowers symbolize different kinds of love. In Jewish literature, the enchantress Lilith is described as Adam’s first wife, and her character is underscored by lines from Goethe’s Faust attached by Rossetti to the original frame, “Beware . . . for she excels all women in the magic of her locks, and when she twines them round a young man’s neck, she will not ever set him free again.” The artist’s mistress, Fanny Cornforth, is the sitter in this watercolor, which Rossetti and his assistant Dunn based on an oil of 1866 (Delaware Art Museum).

Born in London in 1828, the child of Italian immigrants, Rossetti divided his work between art and poetry all his life. The founder of the Pre-Raphaelite brotherhood, his relationships with women were complex and largely destructive to the women in his life; his first wife became an addict and probably committed suicide, his long term relationship with William Morris' wife helped to destroy that marriage and made her ill health more difficult to bear. 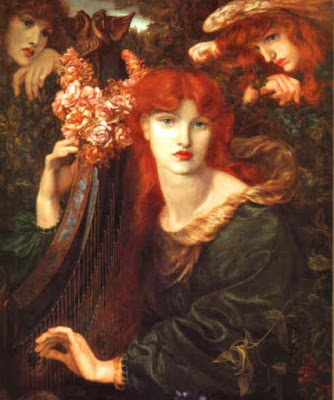 But Rossetti was also self destructive, addicted to chloral and alcohol, became paranoid and depressed and largely withdrew from society until his death in 1882. 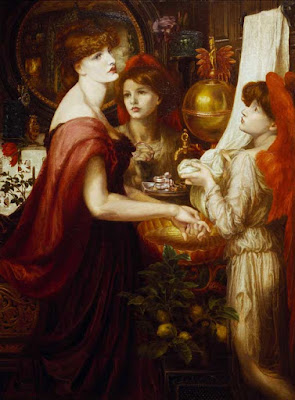 Many of Rossetti's self-estimates of himself as a writer vs his talent as a painter were accurate. Had he been able when young to choose a literary career, he would probably have been a better poet than painter; he was a genuinely original and skillful writer. In part, his achievement was vicarious: he galvanized others in many ways not easily measured. However, insecurity and self-reproach manifested themselves in all but his earliest poems. Rossetti was haunted by a (perhaps partially accurate) private assessment of his weaknesses as a painter and obsessed with Jane Morris as a model. Yet he was perhaps right that his intense response to such private archetypes was the chief distinction of his work. But it would be wrong to sentimentalize Rossetti as a victim of “tragic loves.” It seemed to serve some inner purpose for Rossetti to idealize women who were withdrawn, invalid, and/or melancholic. Their genuine alienation seems to have provided some counterpart for an inner sense of inadequacy and isolation in him. In some way he seemed to need serious emotional attachments with women poised on the edge of withdrawal. In any case, a sense of this equilibration heightened the effects both of his paintings and of his poetry.


"It would be difficult to imagine later nineteenth-century Victorian poetry and art without Rossetti's influence. His writings can perhaps best be viewed as an unusually acute expression of Victorian social uncertainty and loss of faith. Rossetti's poetry on the absence of love is as bleakly despairing as any of the century, and no poet of his period conveyed more profoundly certain central Victorian anxieties: metaphysical uncertainty, sexual anxiety, and fear of time."