Thomas Gainsborough, Baptized on this day in 1727

Baptized on May 14, 1727, Gainsborough became the most famous English landscape and portrait painter of the 18th century - surpassing his rival, Sir Joshua Reynolds. His fame came through his innovations and techniques  in both landscape and portraiture. Gainsborough’s work reflected the love of elegance, luxury and leisure of the 18th century aristocrats who could pay for his full sized  paintings to grace their drawing rooms But his most influential works were ones of idealized pastoral life in the rural countryside. 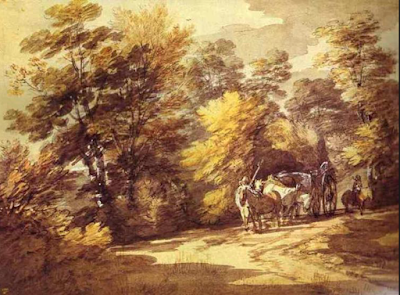 He was born in the spring of 1727 and christened on May 14. Perhaps due to his mother's penchant for painting flowers and encouraging her son's talent with a pencil, Gainsborough assembled a rather impressive portfolio at a young age. By 10, he had drawn some local village landscapes, and added caricatures and other facial studies.

His father was sufficiently impressed with his work to allow him to go to London, England, where he studied at an academy in St. Martin's Lane under the renowned William Hogarth and other masters known for etching, historical painting and portraiture.
During this time he fell in love with Margaret Burr, the illegitimate daughter of the Duke of Beaufort, and her dowry allowed him to set up a studio in Ipswich by the time he was 20. At first, he was not successful so he moved his wife and two daughters to Ipswich, He developed his painting style by studying the works of Van Dyke.

But by 1774, he had become so successful that it was foolish not to be in London. He was one of the founding members of the Royal Academy, and not long after moving his family to the capital, he was summoned to the palace and began portraits of King George III and other nobles. Although the king was obliged to name his rival, Joshua Reynolds, as the official court painter, Gainsborough remained the favorite of the royal family.

"The art historian Michael Rosenthal described Gainsborough as "one of the most technically proficient and, at the same time, most experimental artists of his time". He was noted for the speed with which he applied paint, and he worked more from observations of nature (and of human nature) than from application of formal academic rules. The poetic sensibility of his paintings caused Constable to say, "On looking at them, we find tears in our eyes and know not what brings them."  Rosenthal, Michael. "Gainsborough, Thomas". Grove Art Online. Oxford Art Online. Oxford University Press. Web. 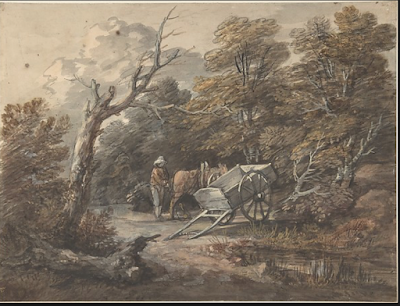 I think most would know Gainsborough from the Blue Boy. I've seen many of his other works, though, and I think his landscapes are where he truly shines. Of course, in paintings like The Duchess of Beaufort, you see how wonderful he was with human features, too. I can understand why they call him the greatest landscape and portrait painter of his time.